OPLENAC
Over 30 Years Of Proud Tradition And Excellence

Serbian folk dancing has been a major activity in Serbian Cultural Association Oplenac since it's inception as a non-profit organization in 1987. All proceeds from the events organized by SCA Oplenac go to the preservation and presentation of Serbian culture and tradition in North America. 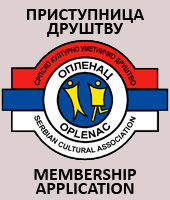